The Box in the River

When I was young, my father worked as a surveyor for the local town planning committee. The Sarae river’s only bridge was a rickety, narrow development made of wood and hand-twined rope. In olden times, the bridge served well enough for a small town populated by simple peasants, but life goes on and the increased traffic and exports being ferried across were too much for the simple old bridge to cope with.

My father worked with a small team of our community elders to dismantle the old bridge to make way for the one, a large and sturdy development made of solid concrete and metal. It would be able to hold up to three automobile lanes, which for our little town was something everyone was very proud of indeed.

One day, the builders and workers at the site, upon inspecting the river bed, discovered an unusual wooden box which had been fixed fast to one of the underwater supports. Upon opening it, the contents of the box revealed a variety of strange objects from long ago: wooden idols, figurines made of twined strips of bark and ancient jewellery crafted from delicate coral and gems. 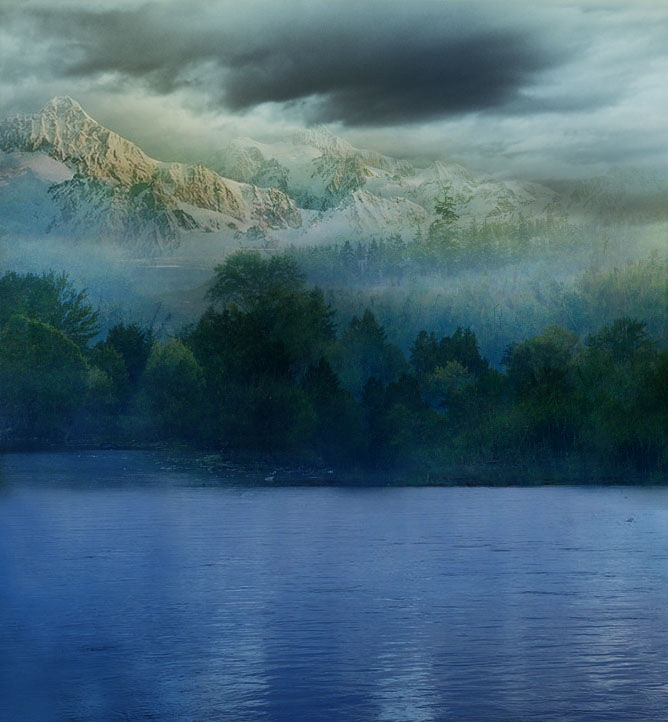 The cache was brought back to the town, studied, and then taken to a far-away museum where its contents were studied and the research disseminated amongst scholars. Initially, the people in the town were pleased with the five minutes of fame the box had brought them, but it didn’t take long for the excitement to die off.

Before too long, the bridge workers began to report having strange dreams – people in old clothing wailing at them, begging for the items to be returned. A chill descended on the town, so that even in the summertime we children were still bundled into thick coats. I was very small at that time, but I can still recall with perfect clarity the dark skies, the fear of nightfall and the worried faces of the adults as they spoke in hushed voices around the table.

For all I have forgotten, I remember the night my father disappeared. I had asked him to come into my room to tell me a story and soothe me to sleep. Even in what must have been his own anxiety, his readily obliged me, and spoke gently with me, for longer than usual. After a little while, my father said it was time for me to sleep, and, in an attempt to stall, I asked if he would get me a drink of water first. He smiled, took my empty glass, and left the room.

I snuggled into my covers and I suppose I was more tired than I had been letting on, for I immediately started to doze off, my eyes closed. I felt a presence, my father’s presence, at the door and the sound of his breathing before I finally drifted off.

The next morning I remember my cold house, my mother speaking in hysterical tones to the town deputy and the tear-streaked faces of my sib;ings. Father had vanished in the night without a trace. All he had really left behind from the previous night was my glass of water, still sitting, half-filled, under the small water tank in the kitchen.

Even then, I knew, that the presence I had felt at my door, watching me, and breathing, had not been my father, but someone – something else. Something from a cold place which ached for all those things which anyone living takes for granted.

In time, arrangements were made, grave-faced mediums were brought in and the items were, one by one, located and brought back to the town. They were placed back inside the box they had been found in and the box was then deposited underneath the new bridge, encased in concrete and buried underwater for all time.

After that, everything returned to normal. The sun returned, laughter returned – but not my father.

Only rarely do I ponder that time in my life, my recollections distorted by the fog of youth. Far from the land of my birth, it is seldom that I see a river to match the beauty of the one I knew so well. When I come across one, I am reminded of the strong waters of the Sarae. In my minds eyes, I see once more those churning black currents which whisper, dream and remember.